It’s been 5ish weeks since my last pint, the day we were all told to stop going to pubs, but they’d still be open. I was seeing a friend who’s coping mechanism is to assume everything will be fine. His optimism is one of the many characteristics that I love about him, but at that moment it meant I had to be the doomsayer.

The pub was filled with people who had already lost their jobs, figuring out their next steps: give up on their career, move out of London, back home with their parents, yet again.

Others discussed the difference between PAYE, self-employed and zero-hour contracts, and tried to figure out who was on what.

I’ve tried not to worry too much about the virus itself. Not that the virus isn’t a disaster, it’s just one of those situations where I’ll be most helpful by not being in the way.

A friend best described those first 2 weeks of lockdown as “my social life has both imploded and exploded at the same time”. I only see two people in real life, but I’ve spoken to friends I haven’t heard from in years, trying to catch-up with each other’s lives before getting to the matter at hand: how do you pronounce “furlough” and what does it mean?

It was, of course, only a short while before I myself broke. A difficult winter was turning into a challenging spring, and my summer plans were being cancelled one after another. I started getting withdrawal, not from alcohol, there’s plenty of that, but going to pubs and parties. I’ve realised that without these, along with many other benefits like fun, I don’t have an excuse to stop looking at my computer and that was pretty important for me.

I was annoyed to be learning something about myself. I was very anti this crisis being “a moment of self-improvement”. There’s enough going on without lifting the lid on my own mental health. Stiff upper lip, just survive.

But as much as I resented this being seen as a retreat, it still has the characteristics of one, and lessons are going to be learnt whether I want to learn them or not.

This crisis has aged me. I’m diving deep into gardening, something I wasn’t expecting to happen for at least another decade. I’m making meal plans. Small bits of a structure are creeping into my, up until now, very unstructured life.

Whether any of this will stick, I don’t know. I won’t beat myself up if it doesn’t. I’d rather have no lockdown and a messy garden.

I don’t say this to show off, I am as annoyed by it as anyone. But I’ll admit that I’m enjoying aspects of it. I might even be compelled to post pictures of something I’ve successfully grown at some point. Gross. 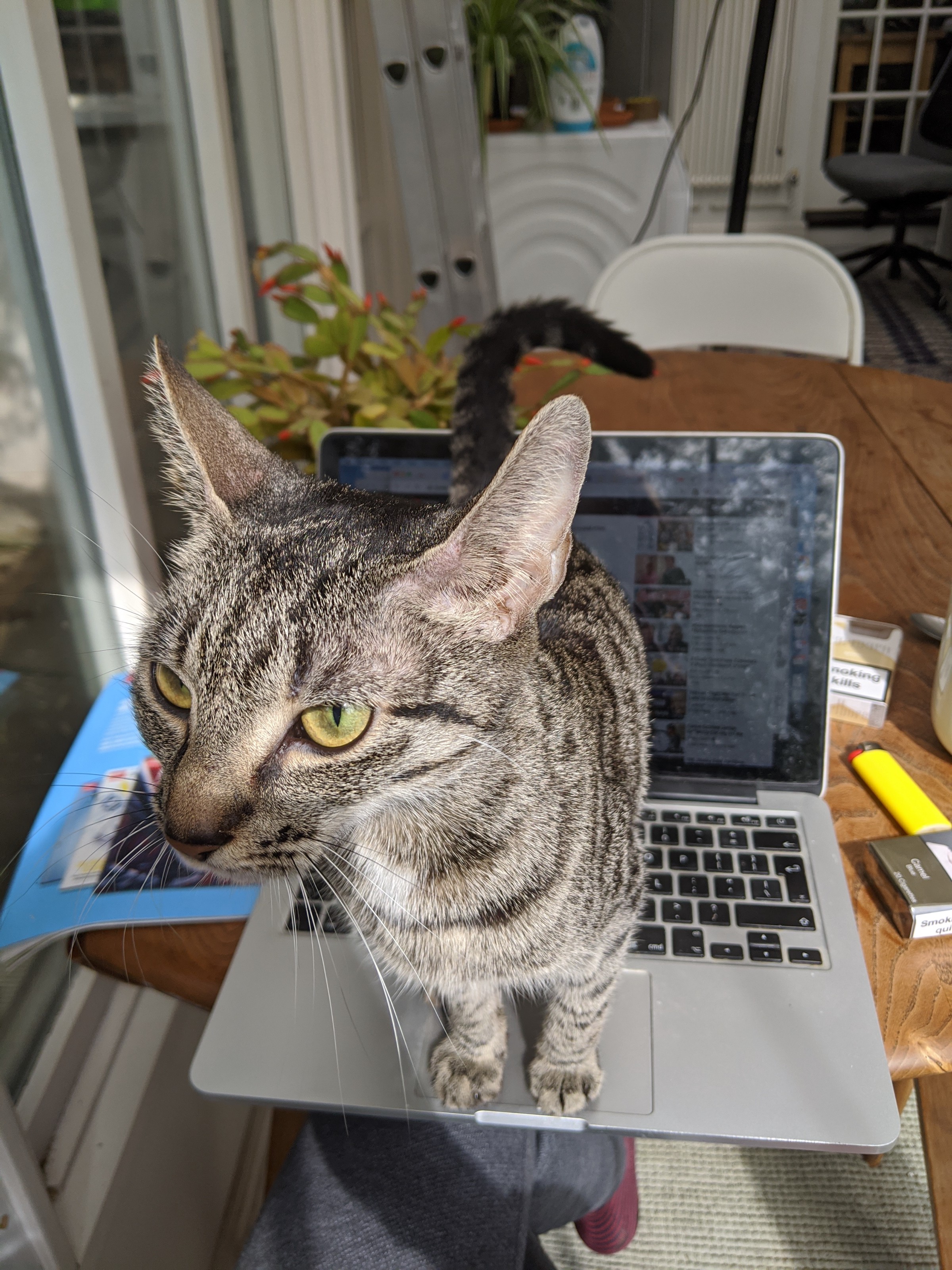 To top everything off, my conservatory has procured a cat.

For two weeks now, she (we think) is waiting at the door for my morning cigarette, comes in and sits on the sofa. She’s in and out, mostly in, for the whole day, until I turf her out before I have to close the door for the night.

I haven’t fed her, and she seems happy and healthy, so there’s no emergency.

She has persisted through my intrigue, worry and annoyance. We get along very well now.

So here I am, weeding my garden and talking in full sentences to a cat. This is Lockdown James.

My favourite piece of writing has been this column by Laurie Penny: This Is Not the Apocalypse You Were Looking For.

If you’re lucky enough to be earning money and looking for a good cause to put some of it, I’d recommend the SWARM hardship fund for people who are highly likely to fall between the cracks of other efforts. And of course, I’d not be doing my duty as a trustee if I don’t suggest Local Welcome.

For more content you can see all my posts tagged with 'note', all of my posts, or read about me.