This post was written by Richard Pope and James Darling

10 years ago today was the first ‘National Hack The Government Day’, the first of a few Rewired State and Young Rewired State hackdays. We’ve reprinted some posters for those who would like one, but first, some reflection:

Hackdays had been done before, but none for Government, and possibly this was the first hackday that wasn’t connected to a company. Not that Rewired State was alone, It was inspired by UKGovWeb and there was also mySociety, OKFN, Guardian Open platform, the BBC/Yahoo Hackday, the launch of data.gov, TeaCamp, Democracy Club, Directgov Innovate, and Show Us A Better Way to name but a few1.

The big issue for us back in 2009 was that there was no place for developers and designers in government.

A lot has changed since 2009. Most notably: GDS and GOV.UK happened. Lots of good things followed.

There’s now a community of people who care about digital government that dwarfs the one of 2009. And they don’t just care about it, many of them are working in government, part of networks that transcend the silos of government departments. And those people work in a way that is both modern and follows a well-understood process that is firmly embedded in the culture of the civil service.

In 2009 there were people with placards outside the Whitehall demanding the adoption of open-source, while inside the buildings, IT was provided by huge external systems integrators. It is now a matter of course that designers and developers should work in government. Agile is the norm. User research is the norm. Continuous deployment is now the norm. Even with departments reasserting their power over the centre, it’s hard to see the modern design and development practices they’ve brought with them going away.

The result of all this is government services that feel like they are getting incrementally better for users. However, they have been getting better mostly within the organisational structures and infrastructures of 2009.

What are today’s big issues?

Rewired State, and the wider civic tech movement, was in part about giving technologists a platform to show government how things could be done differently. That critical voice went quiet with the arrival of GDS, and it’s not clear what the equivalent platform is today.

It’s easy to see why. The word ‘innovation’ is rightly problematic in government. It’s too often a lucrative excuse for noodling about without consequence (see many things blockchain today). Also, there’s just so many basic things to fix. But at times it seems like the new civil service sees fixing the basics as the goal.

Legacy IT is still a major problem that the GDS movement hasn’t really addressed. The data layer is still unreformed. It remains an unanswered question if the UK’s ‘service-layer down’ approach, the ‘registry-layer up’ approach of Estonia, or some totally different model will ultimately prove to be the best route to a transformed government.

Both legacy and data lack a place in the new orthodoxy, and in user centred design more broadly. That’s probably because they are difficult and require political capital. It’s hard to justify investment in digital infrastructure when the benefits come in the next electoral cycle or to another department’s budget.

There’s no sign of that next generation of political leaders who truly understand digital at a time where the failings of our institutions to adapt to the digital age is having increasingly political consequences. Even if there were, there’s Brexit. Whichever side of the Brexit divide you sit on — and it is a divide — it represents a denial of service attack on the civil service, parliament and political debate.

It is apparent more than ever in 2019 that the challenges digital presents are no longer limited to government. As a country, we need to invest in the digital renewal of the whole of our civil society — healthcare, unions, consumer rights organisations — any organisation that help people hold power to account or build genuine community and solidarity. We need to make them fit for the digital age.

The question we need to be asking ourselves in 2019 is: will a gradual, Fabian style approach get the UK to where it needs to be quickly enough? Probably not. 2019, more than ever, is not a time for patching.

So what to do next? There are no easy answers, but two things we think it might be useful to start a discussion about:

That’s the conversation we’d like to start having in 2019. 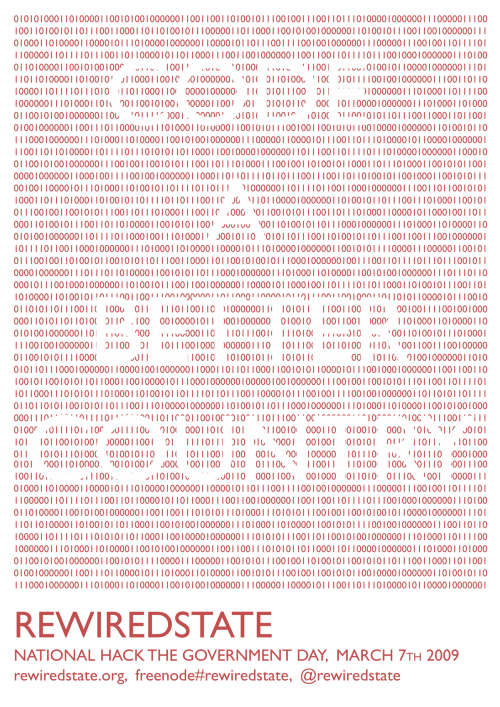 Rewired State was 10 years ago. We managed to find the original design files for the posters from that day and have printed (way too many of) them as A5 posters on nice heavy silk paper.

If you’d like one, or several, email us your address to rewiredstateposters@abscond.org and we’ll post you one.

Also, we’d like to meet in the pub on 18th April. We’ll bring posters there too. Here’s a Facebook event.