I sat in a TW3 meeting with various selected people to discuss TW3. TW3 stands for The Way We Work. We being people who work for the Ministry of Justice or its various agencies. We were being asked about the way we work, and more specifically how it can be improved. I spent most of the meeting just listening, because “how would you fix your working practices?” is an incredibly hard thing to answer. I listened to various simple, actionable, additive1 and modern sounding things we could change to the way we work. Add some tablet computers here and more video conferencing there. I worked in the digital department, and at the time I was working on our internal tools so I guess I was meant to write these things down and agree wholeheartedly. But I struggled. It felt like there was a bigger problem not being mentioned by anyone. Culture.

I’m 26 and this is my first time working outside of East London2, so forgive me if I get this entirely wrong, but I think we got here due to some decisions made before my time. Culture seemed to be something to be actively avoided in big organisations. I get why. I hear of a world run by a monoculture of publicly educated white men. Culture meant golf courses, clubs and nepotism. If that’s what it means, then we should get rid of it. We should have a meritocracy, right? Understandable but…

Whilst there have been some improvements (I mean, who plays golf any more?) the world is still largely run by publicly educated white men, and work has become a cultureless tundra. Can we say we have reached the end of this experiment now? For without culture, I believe our progress, both professionally and societally, will be excruciatingly slow. Stopping the monoculture was the correct thing to do, but we went the wrong way; we need more culture, not less.

Culture is important. Getting it right is one of those things that I’m loath to point out the business benefits of, being the dreamy sort that keeps himself warm at night with thoughts of making the world a better place. But if it helps, I believe the organisations that will most succeed will be those that get their culture right. And as I’m in the business of caring about government, I want to see the civil service culture improve dramatically.

So here’s a little story about one of the first things I did when I joined the fledgling Ministry of Justice Digital Services team.

A story about milk 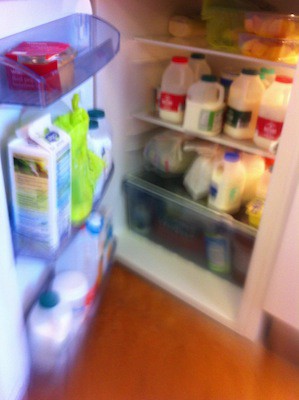 What does it say about a community that the individuals feel the need to do this. It wasn’t just the milk. It was explained to all newcomers that everyone also buys their own tea and sugar, and then to make sure that no-one else uses what is rightly theirs, they store them in their personal lockers.

I imagine that plenty of you reading this will say ‘so what?’. Plenty of people did when I tried to fix it. But a) I’d like to think I’m not the only one who thinks this is proper weird behaviour3 for a group of people who I imagine mostly don’t include milk in their budgeting4 and b) we can fix this! And if we can’t, then I worry about our ability to improve government services.

So I went and bought a 4 pint bottle of milk, a big pack of Yorkshire Gold tea, and put up a sign that read

Everything with ‘DSD5’ written on is free to anyone.

It’s funny to look back on now, as this kind of cultural involvement has become commonplace and even expected, but back then it seemed quite bold. Like this sort of pro-activeness was almost trouble making.

Soon the sign came down, as everything was for public consumption. For a little while, the only thing written on the 4 pint bottles of milk were rubbish jokes (the best kind) like ‘SELECT * FROM MilkDrinkers’. Now there is nothing.

So that was a very mundane story about milk. Why did I share it? Because I think sharing stories like these is how we increase and improve culture. It’s not something that can be fixed by having TW3 meetings with senior management. While the senior management should absolutely read these, and (sometimes) discuss them, the act of writing and sharing them itself is how to improve the way we work.

In case you were in doubt, I’m not suggesting that sharing milk is how you improve the culture. Maybe sharing milk isn’t the right culture for a particular organisation, but I’d be interested in hearing why.

These discussions should be in the open. They may not be interesting to people outside your organisation (although you may be surprised), but knowing that they are public will help prevent them being too inward looking. Remember that (hopefully) new people will be joining your team regularly, remember that you are not an isolated team.

So share your culture stories! Maybe we’ll find somewhere to collate them. Or tell me why you think this is a stupid idea. If no-one convincingly does the latter, then I hope to post up a few more of my own.

To kick us off, here are some stories by Alice Bartlett6 that encouraged me to do this one: Six Months at GDS and Tampon Club. I also highly recommend reading Hidden dangers of team building rituals for some wise words on ensuring you’re not being exclusionary.